Nurses Amy DeSantis, left, and Courtney Schiersing have had a strong bond ever since DeSantis served as Schiersing’s primary caregiver in Women & Children’s Hospital’s NICU after she was born more than 3 months early in 1999. DeSantis is now helping to train Schiersing as a NICU nurse. 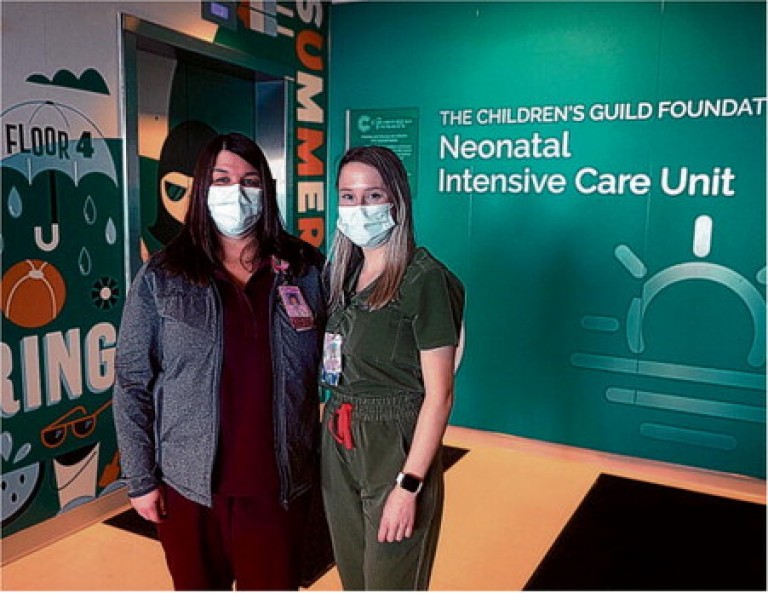 Courtney Schiersing weighed less than 2 pounds when Amy DeSantis first laid eyes on her in the neonatal intensive care unit at Women & Children’s Hospital.  The newborn arrived after 26 weeks in the womb, more than three months earlier than expected, at roughly the threshold for survivability in 1999.

Baby and nurse stayed connected through many milestones during the two decades since, including on Monday, when Schiersing celebrated her 23rdbirthday working side-by-side with her protégé in the NICU at Oishei Children’s Hospital, which replaced Women & Children’s in 2017.

“I am the only health care worker in my family,” Schiersing said beforehand. “It was mainly based off my interest in learning how I was born and later seeing the NICU and all the babies like me.”  Schiersing and some of her fellow 175 Oishei neonatal ICU nurses were born at the former Buffalo children’s hospital.

Courtney Schiersing, left, is following in the footsteps of the nurse who cared for her 23 years ago in the NICU, Amy DeSantis. Courtney often volunteered in NICU NURSE.  There almost certainly have been other NICU babies who went on to become nurses elsewhere. But this is the first-time veteran nurses remember a baby born in the Children’s NICU who ended up working alongside the nurse who handled her primary care years earlier.

As a child, Schiersing wanted to be a teacher. That changed when she was about 7 and began to understand what life was like in her first few months.  “Everything changed,” said her mother, Jackie, “and she wanted to be a nurse. As she got older, it was ‘I want to work in the NICU someday. I want to be like Amy.’” Jackie Schiersing’s second pregnancy was typical through almost 25 weeks. At the time, she and her husband, Dave, had a 2-year-old son, DJ.

Early that February, she fell ill at work. Within hours she went into premature labor that an obstetrics team at Sisters Hospital stopped with intravenous medications. They sent her home on bed rest, along with IV drugs to prolong the pregnancy.  Courtney wouldn’t wait. She was born Feb. 7 at Sisters, which didn’t have a NICU at the time. She was 1 pound, 12 ounces, measured 12.4 inches long and was transferred to Women & Children’s before her parents had a chance to hold her.  Their daughter was placed into an incubator, called an isolette, to regulate her body temperature and onto a ventilator to enhance her lung development, as specialists talked with the Schiersings about perils ahead. The premature delivery could affect her brain development, causing a range of mental and physical challenges. Her hearing or eyesight might not fully develop. Because of the strain on her tiny organs, she might not make it at all.

They also said chances were good she would grow up healthy. “She was so little,” her mother said. “It was extremely scary.”

In the shadow of such uncertainty, DeSantis became a bright light for Courtney, sharing realities – and hope – along the way.

“She was very reassuring that any setbacks for Courtney were normal at her age, that it didn’t mean she was going backwards,” Jackie Schiersing recalled. “She’d say, ‘It’s just a minor step back and she’ll make up for it.’” The first-year NICU nurse became primary caregiver each week during her three 12-hour shifts, talking by phone before 7 a.m. regularly with Jackie Schiersing, who two weeks after delivery went back to work so she would have maternity leave when Courtney came home. She and her husband ate dinner after work, left their son with loved ones and arrived at Children’s to check in with Amy or another primary nurse starting their 7 p.m. overnight shift.

Her parents got their first chance to hold their daughter 37 days after her arrival, on March 16. Courtney left the hospital after 72 days. She weighed about 4 pounds.

Courtney Schiersing grew up and still lives in West Seneca. She turned her desire to become a NICU nurse into a mission while at West Seneca East High School, enrolling in the Life Science Academy before graduating in 2017 and enrolling in the nursing school at Niagara University. By the time she graduated in May, she already had become a presence in unit.

“From high school right up until now, she has volunteered for anything that the NICU has done since she was a ‘NICU grad,’” DeSantis said. “She’s volunteered for every single occasion. The March of Dimes walk. Our bereavement programs. She’s made blankets for preemies. She’s a built-in, lifelong NICU nurse already.”

Schiersing carried out her internship on the eighth floor of Oishei Children’s, working with mothers recovering from giving birth, including two premature babies. DeSantis is now one of her on-the- job trainers – called preceptors – who last month started to supervise Schiersing during her 12-week NICU orientation.

They hardly needed a reintroduction. DeSantis has received occasional cards, letters and photos from the Schiersings since Courtney left Women & Children’s in 1999, including on the new nurse’s first birthday. She also attended several West Seneca East sporting events when Courtney was a high school cheerleader, as well as her high school and college graduations. Such activities are common for many NICU nurses, DeSantis said.

“We spend more weekends and holidays with our babies than we do our own families, which is why we all become so close,” she said. “We get invited to lots of birthday parties, lots of celebrations – all the fun things after the stress of the NICU. One of the best parts of the job is seeing the babies afterwards, once they’re growing up and thriving.”

Last year, 1,029 babies were cared for in the 64-bed Oishei Children’s neonatal ICU, the only Level 4 NICU in the region; 97% of them survived.

Schiersing said she developed asthma as a young girl, but it vanished during her teens. The only other physical remnant from her early days, she said, is her height. She, like DeSantis, is 5 feet tall.  She graduated from high school and college with honors. The approach she took to her education, community service and nursing at the start of the pandemic underlined her desire to help others, her mother said.  In spring 2020, while in her junior year in nursing school, Courtney volunteered with the Covid-19 response team at Buffalo General Medical Center. The work involved helping nurses tend to those sickened with the little-understood airborne disease during a time when treatments were far more limited.  “The thought of that just terrified me because we know what Covid was like and what was really happening in the hospitals,” Jackie Schiersing said. “All I could say was ‘OK, she’s 21 and she’s old enough to make her own decisions.’ “They tell you that preemies are stubborn, and man are they correct,” she added. “Courtney is very stubborn, and very determined. She told me back then, ‘If I had my license and I could, I’d be in New York City right now.’ She’s just a very caring person.”

A little over a week ago in the NICU, one of her preceptors called Schiersing into a room where a concerned couple was going through the same ordeal her parents endured nearly 23 years earlier.  “This is what 26 weeks looks like,” the nurse told the couple when introducing the new NICU nurse. The astonished and comforted parents – of a tiny girl – later wondered aloud whether their daughter might one day be standing in very similar circumstances as a NICU nurse.

Schiersing and DeSantis say the hardest part of their job is the death of a child – and that they do their best to help families honor that child as they grieve.  The most comforting part: Rocking the many babies strong enough to leave their medical supports and take a bottle in the days before they go home.

That last piece of bonding takes place from chairs set up along the fourth-floor windows overlooking downtown.

If you love it as much as most of us do in the NICU,” DeSantis said, “it’s not really even considered a job.” 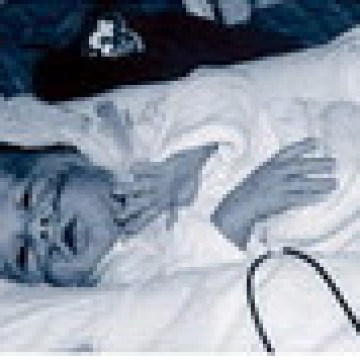 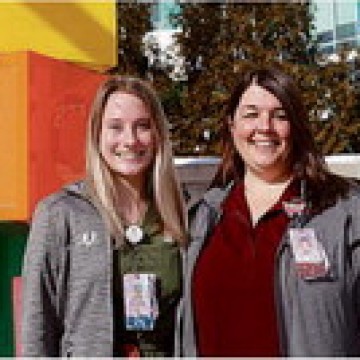